Version 1.1.4 of Unsung Warriors - Prologue is now available for everyone to play! We've changed the following:

Those are the changes we've made. The new versions can be downloaded on our itch.io page.

Ever since our successful Kickstarter campaign, we've been scaling up development. So in this post we would also like to highlight some new features coming to the full game.

We've made our animations more fluent (by improving the rendering of physics). You can see the result of this in the video below. The difference is subtle, and only visible when playing the video on 60fps. The best way to spot it is to look at the character's eyes. We've also included this feature in v1.1.4 of the Prologue.

By the way, the character you're looking at is called Aefa. You can choose between her and Einar at the start of the full game.

One of the first stretch goals of our campaign is the Arena mode. We've been working on creating artwork for this environment. The Arena (other than being a nice new game mode) is also a good place for us to start testing the combat mechanics and to create enemies for the story mode. 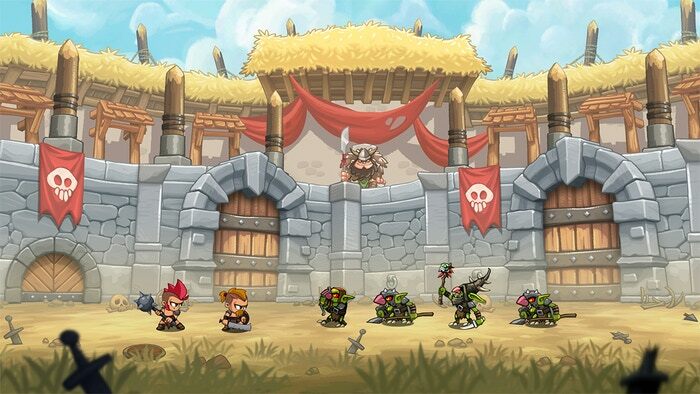 We've made changes to the freedom of movement for the players and added a new ledge grab. Which makes the game a bit less unforgiving when the player misses a jump. The main characters are now able to do wall grabs and ledge grabs. Wall grabs are also a nice way to design more vertical-oriented levels.

So much for this update. Thanks for reading, we'll be continuing development and will be checking back in when we have made more progress.